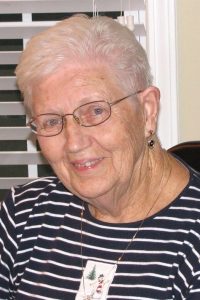 Marjorie Alma Schrader of Okawville, IL departed this life in the Freeburg Care Center in Freeburg, IL on Wednesday, December 7, 2022 at 7:08 A.M. She had attained the age of 93 years, 9 months, and 11 days.

Marge was born at Elkton, IL on February 27, 1929, the daughter of Emil and Anna (nee Moeller) Klingenberg. She was united in marriage to Robert Schrader on June 5, 1948, in the St Peter Evangelical and Reformed Church at Okawville and he preceded her in death on August 16, 2001.

Marge was foremost a loving daughter, sister, wife, mother, grandmother, great grandmother, aunt, and friend. Those who knew her were aware that she was never afraid or hesitant to render an opinion on things. She was an excellent cook, baker, and canner. All who gathered around her dining table were treated to her magnificent meals. Her dill pickles were always anxiously waited for and hurriedly consumed. In addition to raising her family and tending to her garden and orchard, she worked as a beautician part-time for her friend Polly Koetting, and she also cooked at the Okawville Senior Center for several years. Marge was a member of St. Peter’s United Church of Christ in Okawville where she enjoyed many years as an active member of the Women’s Guild. She was also a member of the Okawville Community Club.

In addition to her parents and husband, she was preceded in death by three brothers, Elmo, Earl, and Wallace Klingenberg as well as their spouses, and her dear sister, Vera Luechtefeld and her husband.

In accordance with the wishes of Marge and her family, cremation was performed.

A service of remembrance and a celebration of her life will be held from St. Peter’s United Church of Christ in Okawville on Saturday, December 17, 2022 at 11 A.M. with Pastor Jeffrey Schwab officiating. Interment of ashes will be in the church cemetery.

Friends may call at St. Peter’s United Church of Christ in Okawville on Saturday, December 17 from 9 A.M. until the time of the service.

In lieu of flowers, memorials may be made to the St. Peter’s U.C.C. Women’s Guild and will be accepted by the Campagna Funeral Home.