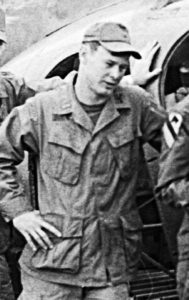 It just isn’t on Thanksgiving that James Nowicki gives thanks that he survived being a Vietnamese Prisoner Of War. The 77 year old Radom native has given thanks virtually every day of his life for the past 50 years.

Nowicki piloted` a Scout helicopter, shooting at the enemy in the jungles of North Vietnam. They flew at treetop level,with a gunship designed to hunt down the enemy flying above them.

That dangerous assignment was nearly considered a death sentence. “After six months – if you survived – you got a different assignment,” Nowicki said. The survivor rate for a scout pilot was 19 percent, Nowicki said. “You didn’t really expect to survive, if you were honest with yourself.”

As that dangerous six month assignment near the end, Nowicki’s luck ran out.

In November 1969 his helicopter was shot down. During the cover of darkness  he ran through the jungle for three nights to try to make it back to safety at camp.

Nowicki was captured by the Viet Cong. He and the  other soldiers were taken to a POW camp in nearby Cambodia. After six months in Cambodia Nowicki and five other prisoners were marched 400 miles on the Ho Chi Minh Trail to Hanoi. They were blindfolded, with their hands tied behind their backs. They were connected to each other with ropes around their necks, making it virtually impossible to escape.

The guards beat a soldier to death with a shovel because he was too weak to walk.

When Nowicki was captured he weighed 165 pounds, When he got to Hanoi after the 400 mile march he weighed 119 pounds.

For three years Nowicki sat alone in the cell the POW camp. He slept on boards on the floor. He had nothing to do, nothing to read, and no one to talk to. He could not write to his family, or get letters from them.  He counted the days of captivity by making marks on the wall.

The 100 POWs  devised a code to communicate by tapping walls. They learned each other’s names and where they were from, so that if someone escaped he could  relay who was in the camp.

He endured a skin rash  caused by the heat of Vietnam summers.

At times, Nowicki didn’t think he would get out alive. “When I had malaria and was losing consciousness was the first time I prayed to God to help me,” he said. “I think that God used a Vietcong soldier to help me. At night he secretly fed me.”

Meanwhile, his parents, back home in Radom, were praying for his safety. They learned of their son’s capture on Christmas Eve when a Captain came to church to tell them.

After 3 1/2 years in captivity, Nowicki was released when the war was over. Some of the POWs were not as lucky. They had died of starvation, disease, or were shot.

The released POWs were then taken to a hospital in the Philippines for a week to determine their conditions. Nowicki was transferred to Scott Air Base Hospital, and then to Ft. Knox Hospital in Kentucky. All things considered, Nowicki said that he was in good shape.

Nowicki was honored with a Welcome Home Parade in Nashville. “It was quite humbling. That is something I will always remember,” he said. Although Nowicki had moved with his family to Columbus, Mississippi when he was 14, he still had strong Washington County roots.

Nowicki said he could have gotten out of the Army because of his POW ordeal, but he chose to continue his service.  He went to Ft. Rucker, Alabama for a pilot refresher course.

At Nowicki’s request, he was next stationed at St. Louis so he could live closer to his parents.

The pilot was later stationed at Ft. Rucker and Savannah, Georgia, flying helicopters and planes. He said that he was given “good  assignments” because of his POW status.

Nowicki now lives in Columbus, Mississippi with his wife  Patsy. His own father was a WWII bomber pilot, but none his three children chose to continue the family military legacy. They were likely influenced by the ordeal of their father, Nowicki said.

Nowicki retired from the military in 1989. He then worked another 14 years for the 4-County Electric Company, before his final retirement.

For the first six months after their release, the POW’s kept in contact.  But that waned, as the soldiers went on with their own lives and careers.

Nowicki has remained close with his former flight school roommates. He and a former roommate made a  3,000  mile two week trip from Mississippi to North Carolina, Washington D.C., Pennsylvania,  Ohio, Michigan and Nebraska to visit the scout pilots in their platoon.

Norwicki was the only one of the group who had been shot down and a POW.  “They were glad to see me, but They NEEDED to see Jim” said his traveling companion.

As the years have passed, the nine surviving members of B Troop 57, 17th Air Cavalry have felt a pull to reconnect. They will meet for a reunion in Washington D.C. in 2023.