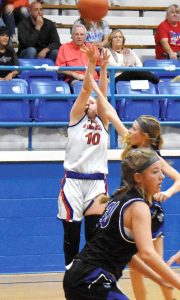 Okawville outscored Carlyle in every quarter on the way to a 42-23 win last Tuesday.

The Junior Lady Rockets had another balanced scoring attack in their 52-21 win over Germantown last Thursday.

Leading by seven points at halftime, Okawville pulled away with an 18-3 run in the third quarter.

Okawville remained unbeaten in 12 games with a 50-9 win over Lebanon Monday.

Rhodes had a big game, pouring in 21 points to pace her squad. Kaylie Behrman added a dozen of her own, Harre had six, Trista Behrman netted four, Statler had three, and Hokeness and Sophia Going both finished with two points.