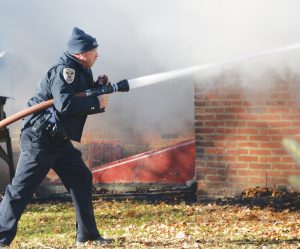 A Venedy family’s home was lost in a fire Monday morning.

The home belonging to Andy and Alicia Luecking was declared a total loss after firefighters from Okawville, Addieville, Nashville and St. Libory extinguished the blaze.

Fire fighters were called to the older brick house with a frame addition on the back about 8 a.m.

The  origination or cause of fire cannot be determined because the extensive damage, said Okawville Assistant Chief Bryon Killion.

No one was hurt, but Alicia Luecking reported that five pets were lost in the fire.