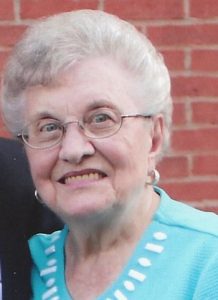 Mrs. Helen Pannier of Freeburg, formerly of Okawville, departed this life at Cedar Trails Senior Living Center in Freeburg on Tuesday, November 1, 2022, at 7:00 A.M. She had attained the age of 95 years, 2 months, and 28 days.

Helen was born near Darmstadt, IL on August 3, 1927, the daughter of Hartmann and Pauline (nee Weilmuenster) Koch. She was united in marriage to Orvil Pannier in the St. Paul United Church of Christ in Belleville on September 1, 1946, and they enjoyed nearly 75 years of marriage until his death on May 16, 2021.

Helen was a homemaker and helped her husband on the family farm until they retired from farming in 1986 and moved off the farm and into Okawville. In September of 2013, they moved to Cedar Trails Senior Living Center in Freeburg. Helen was a member of St. Peter’s United Church of Christ in Okawville where she was an active member of the Women’s Guild. Mrs. Pannier was also a member of the Okawville Community Club and the Okawville Senior Center, where Helen and Orvil volunteered delivering meals to those who were unable to attend in person. She enjoyed working in her garden and tending to her flowers playing cards with her friends and dancing, but most of all loved her family and spending time with them.

In addition to her parents and husband, she was preceded in death by a brother, Norman Koch and his wife Nelda, and a nephew, Larry Koch.

Funeral services will be held at St. Peter’s United Church of Christ in Okawville on Saturday, November 5, 2022, at 10 A.M. with Pastor Jeffrey Schwab officiating. Interment will be in the church cemetery.

Friends may call at St. Peter’s United Church of Christ in Okawville on Friday from 5 P.M. until 8 P.M. and again on Saturday from 8:30 A.M. until the time of the service.

In lieu of flowers, memorials may be made to St. Peter’s United Church of Christ or to ProMedica (formerly Heartland) Hospice and will be accepted by the Campagna Funeral Home.