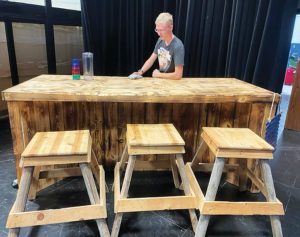 All the “stars” weren’t on the stage at the Okawville High Drama Club performance of “Mamma Mia”last week. Some were out of the spotlight building sets.

The “Dream Team” of dads, as well as technical manager Fred Klapetzky constructed a set of the taverna/ bedroom. It was built on rollers to switch scenes.

They also assembled the staircase and balcony that was used in last year’s performance of  “Seussical The Musical”.