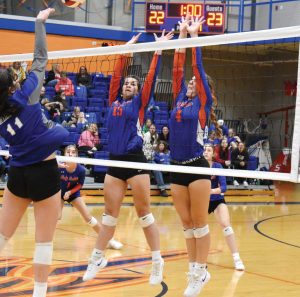 The Okawville Lady Rockets played seven matches in five days last week, including four at the loaded Freeburg Tournament. They managed only two victories in this tough stretch, and their current record is 17-15.

The Lady Rockets held their Pink Out match against Wesclin last Tuesday. The team raised over $6,200 for local cancer survivors Janice Glaubatz and Haidyn Louden, who were recognized during a short ceremony before the varsity match.

Okawville fell short in the match, though, against a good Wesclin team 25-17, 25-9. The Lady Rockets could muster only seven kills as a team.

The result, however, was a 25-22, 27-25 loss to Sparta. Wolf led the way with nine kills, Harre had six, and Heckert added four. Both Going and Obermeier had eleven assists. Harre had sixteen digs, Wienstroer had ten, and Rennegarbe had nine.