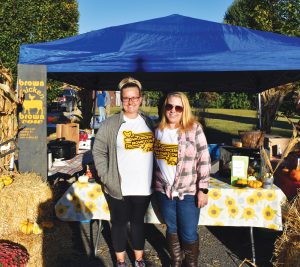 A year  ago Virginia Lugge went to the Chamber of Commerce Chili Cook-off a few days after they moved to Okawville.

Fast forward a year, and Virginia Lugge and friend Jody Sale not only entered the Chili Cook-Off Saturday, but won first place.

Whitney Weeke won People’s Choice through voting of people who bought the unlimited tasting wristband. She received a certificate.

Annette’s Flowers and Gifts won Best Decorated Booth with her witch theme booth. Each sample of chili had an “eye” in. Each bowl of chili came with a “finger” she made from bread dough, and pink icing and almond slice for the nail. She received a Chamber of Commerce gift certificate.