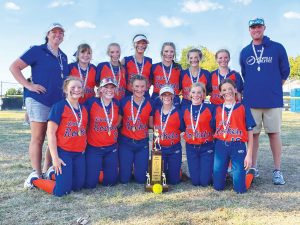 Okawville built an early lead and held off a late charge by Jonesboro to win the state championship game 5-3.

Kenley Hackstadt did much of the work herself, earning the win in the pitcher’s circle while going 2-for-3 at the plate.

The Lady Rockets struck for three more runs in the third, with doubles by Jaycie Buss and Brynn Rhodes and an error on a ball put in play by Elly Hesker.

Five runs were more than enough cushion for Hackstadt, who allowed just one hit and struck out three hitters.

“This team was one of a kind,” said coach Haylee Bowers. “The future of Lady Rocket softball is bright.”

Hackstadt also got the win in that game, allowing a single run and scattering six hits and striking out 11 in seven innings of work.

Jilien Harre homered in the second inning to put Okawville on the board first. She finished with three hits to lead the offense.

Leading 2-1 after four innings, the Junior Lady Rockets opened up a decisive lead in the fifth thanks in part to a single by Buss and a home run by Rhodes.

It would be difficult to overstate how much Okawville dominated this season. Not only were the Junior Lady Rockets unbeaten in 22 games, they outscored opponents 265-22. Their average margin for victory was 11 runs, and opponents were held scoreless in half of the games.