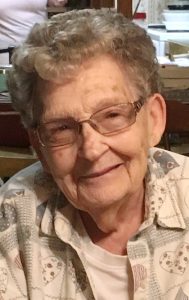 Mrs. Leona Schrader of Okawville, IL departed this life at the Countryside Manor in Aviston, IL on Wednesday, September 14, 2022 at 11:25 A.M. She had attained the age of 89 years and 22 days.

Leona was born on the family farm near Johannisburg, IL on August 22, 1933, the daughter of Charles and Ida (nee Meyer) Barkau. She was united in marriage to Ralph Schrader in Carlyle, IL on January 29, 1960 and he survives her passing.

Mrs. Schrader was a faithful member of the Lighthouse Community Church in Nashville, IL, and was a former member of the St. Peter’s United Church of Christ in Okawville where she had been a member of the Women’s Guild. Leona enjoyed spending time outdoors camping, working in her yard, and tending to her flowers. She also enjoyed reading and working on puzzles, but especially loved spending time with her family.

In addition to her parents, she was preceded in death by three brothers, Leroy, Stanley, and Roy Barkau; two sisters, Esther Davis and Gladys Barkau; and a son-in-law, David Martin.

In accordance with the wishes of Leona and her family, cremation will be performed.

Memorial services will be held from the Campagna Funeral Home in Okawville on Thursday, September 22, 2022 at 1 P.M. with Pastor Danny Donato officiating. Interment of ashes will be in the St. Peter’s Cemetery in Okawville.

Friends may call at the Campagna Funeral Home in Okawville on Thursday from 11 A.M. until the time of the service.

In lieu of flowers, memorials may be made to the Lighthouse Community Church in Nashville and will be accepted by the Campagna Funeral Home.