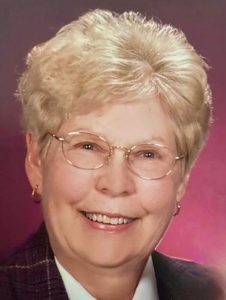 Mary Elsie Stegman, 82 of Nashville, passed away at 6:36 a.m. on Wednesday, August 24, 2022 at Washington County Hospital in Nashville.

Mary was born on October 13, 1939 in Oakdale, the daughter of Lawrence and Wilma Doolin Ibendahl. She married Paul William Stegman on February 27, 1960 at Trinity Lutheran Church in Nashville.

She was preceded in death by her parents.

Mary first worked at Bussman Fuse Company in St. Louis and later was the cook at Trinity-St. John Lutheran School in Nashville and was a homemaker. She was a member of the Trinity Lutheran Church in Nashville where she taught Sunday School and was active in the Fellowship Club. She was a 4-H leader and served as the Southern Illinois Director of the Illinois Wildlife Federation. She enjoyed camping, gardening and spending time with her family and grandchildren.

Funeral services will be held at 11:00 a.m. on Saturday, August 27, 2022 at Trinity Lutheran Church in Nashville with Rev. David Benning officiating. Burial will follow in the church cemetery.

Friends may call from 9:30 a.m. until service time on Saturday at the church. Memorial contributions may be made to Trinity Lutheran Church or Trinity- St. John Lutheran School. Styninger Funeral Home in Nashville is in charge of arrangements.