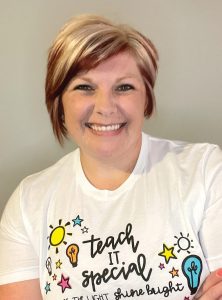 Amy Forbeck followed in her mother’s footsteps when she decided to become a teacher, but she is blazing her own trail in her work with special education students.

Forbeck who began her first school year at Okawville last week, is a special education teacher for students in kindergarten through third grades. She said special education became her focus after spending time in her mother Judy’s classroom at St. Ann School in Nashville.

“Mom had some kiddos who needed some extra help in her classes,” Forbeck said. “That was when I figured out that I wanted to work in special education.”

Read more about it in this week’s issue