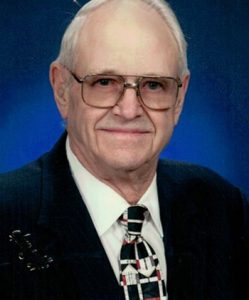 Born on May 1, 1927 in Beaucoup Township, the son of Frederick W. and Elizabeth M. Prueshner Woker, Irwin married Hilda Anna Westermeyer on June 16, 1957 at Zion UCC in Hoyleton and she passed away on April 9, 2007.

Also preceding him in death were his parents; a brother Leroy (Nelda) Woker; sister-in-law Bernice (Harry) Hongsermeier; and a son-in-law Jeff De Bruine.

Left to mourn his passing is his daughter, Lisa De Bruine of Bloomington and two granddaughters, Anna Louise and Emma Elizabeth De Bruine.

Irwin was baptized and confirmed at Trinity Lutheran Church in Nashville where he was a life long member. He was a farmer and named Conservation Farmer of the year in 1979 for Washington County. After his retirement in 1990, he moved to town and worked for Woker Plumbing and Heating for over 14 years.

Irwin was a 1945 graduate of Nashville High School and served in the United States Army during the Korean War. He was a 50 year member of the Nashville American Legion Post #10.

Funeral services will be held at 11:00 a.m. on Monday, August 15, 2022 at Trinity Lutheran Church in Nashville with Rev. David Benning officiating.

Friends may call from 9:30 a.m. until service time on Monday at the church. Burial will follow in the Trinity Lutheran Cemetery in Nashville with military rites accorded by the Nashville American Legion Post #110.

Memorial contributions may be made to Trinity Lutheran Church. Styninger Funeral Home in Nashville is in charge of arrangements. Online expressions of sympathy may be made at www.styningerfuneralhomes.com or on the funeral home’s Facebook page.