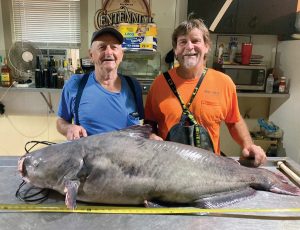 A local man landed a whopper of a catfish, and that is not just some fisherman’s tale.

Sonny Eckhardt of Okawville caught a mammoth blue catfish last week, and he has the pictures to prove it.

This was the catch of a lifetime for Eckhardt, who says he has been fishing all of his life. The fish measured 49 inches and weighed 70 pounds and eight ounces.

“I’ve had some 40-pounders before, but this is the biggest one I’ve ever caught,” he said.

Read more in this week’s issue.