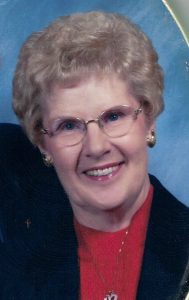 Carlene M. Michael, 90, of Hoyleton passed away at 5:32 p.m. on Sunday, July 10, 2022 at Washington County Hospital in Nashville. She was born on February 5, 1932 in Hoyleton, the daughter of Martin and Erna Storck Neuhaus.

Carlene married Earl C. Michael on April 15, 1951 in Hoyleton and he passed away on June 10, 2006. Also preceding her in death were her parents, a son-in-law Bruce Trotts and a grandson-in-law Jason Quick.

Carlene previously worked at the Hoyleton State and Savings Bank and retired as a loan officer with the Armco Credit Union in Ashland, KY. She was a long time member of the Trinity Lutheran Church in Hoyleton where she served as treasurer was active in the Ladies Aid and played in the chime choir (Ding Dongs). She was a member of the American Legion Auxillary and Hoyleton Community Club where she served as treasurer. She was very active with the Hoyleton Hofbraufest and served as Grand Marshal in 2019.

Funeral services will be held at 11:00 a.m. on Friday, July 15, 2022 at Trinity Lutheran Church in Hoyleton with Rev. Nathan Wollenberg officiating. Burial will follow in the church cemetery.

Friends may call from 9:30 a.m. until service time on Friday at the church. Memorial contributions may be made to Trinity Lutheran Church in Hoyleton or a charity of the donor’s choice.

Styninger Funeral & Cremation Chapel in Hoyleton is in charge of arrangements. Online expressions of sympathy may be made at www.styningerfuneralhomes.com or on the funeral homes Facebook page.