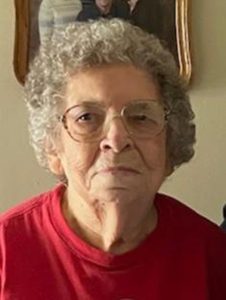 Rosa was born in Plum Hill, IL on August 12, 1935 the daughter of George and Olivia (nee Moeller) Strate. She was united in marriage to Milton Cameron at St. Paul’s United Church of Christ in Nashville, IL on January 15, 1959 and he preceded her in death on April 21, 1990.

She was a farm wife and homemaker and had previously babysat for numerous local children, with all recognizing her as Grama Rosie.  She enjoyed, yard work, gardening, and prior to a decline in her vision, fishing and a friendly game of cards.  She was also an avid St. Louis Cardinal fan.

In addition to her parents and husband, she was preceded in death by a grandson, Holden Cameron; a great-grandson Lucas Cameron; five brothers, Curtis Paul, George, Engelhardt, Kenneth, and Harry Strate; two sister, Shirley Dunnigan and Maxine Laughlin; a half-brother, James Strate; and a half-sister, Mary Phillipi.

Funeral services will be held at the Campagna Funeral Home in Ashley, IL on Wednesday, June 29, 2022 at 11 A.M. with her grandson, Eric Cameron officiating. Interment will be in the Ashley Cemetery in Ashley, IL.

In lieu of flowers, memorials may be made to the Ashley Cemetery and will be accepted by the Campagna Funeral Home.