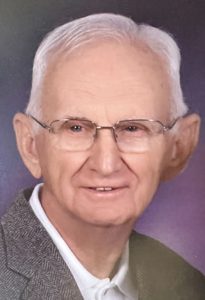 William was born to Jewel and Gladys (nee Zapp) Richards on July 28, 1928 in Nashville, IL.   He attended Nashville Grade School and Nashville High School.  William was united in marriage to Mary Joanna Carson on May 27, 1949, by Joanna’s uncle, Rev. Melville K. Carson, in the Reformed Presbyterian Church in Oakdale.  He and his wife, Joanna, were married for 70 wonderful years, and she preceded him in death on July 12, 2019.

William joined the Army Air Forces on September 10, 1946, although in September of 1947 it became the U.S. Air Force.  He was a member of the 94th Fighter Squadron, 1st Fighter Group, and was based at March Air Force Base in California; however, he was transferred to the Alaskan Air Command at Ladd Field, Alaska, for four months in October of 1947.  While in the U.S. Air Force, William served his Country in World War II, and was honorably discharged on August 30, 1949.  Upon his discharge William was awarded the World War II Victory Medal, the Army Good Conduct Medal and the Air Force Good Conduct Medal.

After his discharge from the Air Force, William came back to Nashville and he and his wife, Joanna, ran the Richards’ Radio and TV Store for many years.  William also served on the Nashville Township Board as Auditor from 1965 to 1981, and as Township Clerk from 1981 to 2017 when he retired from the Board.  He was a loving and devoted husband, father, grandfather, and great grandfather, and he loved spending time with his family.

Funeral services will be held at the First Presbyterian Church in Nashville, IL on Monday, June 20, 2022, at 11 A.M. with Pastor Phil Carson officiating.  Interment will follow in the Masonic Cemetery in Nashville, IL.  Military graveside rites will be accorded by the American Legion Post 110.

Friends may call at the First Presbyterian Church in Nashville on Monday from 9 A.M. until the service hour.

Should friends desire, memorials may be made to the First Presbyterian Church, the Nashville Legion Home Building Fund or the Masonic Cemetery and will be accepted by the Campagna Funeral Home, who is assisting the family with arrangements.