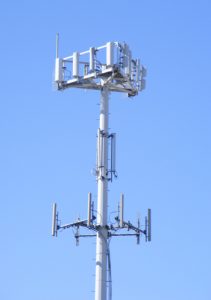 Washington County Zoning Administrator Matt Bierman issued a building permit for a cell tower in Plum Hill Township on the last day of the permitting process.

That allows Tillman Infrastructure to build a 338’ high tower on Jefferson Road, north of State Route 15. Tillman has already begun staking off the tower that will be leased to AT & T.

Although the permit has been issued, Alan Blumhorst has not yet given up his fight to stop the tower that he thinks will have a negative effect on his petting zoo, Rainbow Ranch.

He has appealed to the FCC to rescind its permit because his property is considered historic. The Washington County Historical Society deemed it an historic site because it has a circa 1850 barn.

One of the criteria the FCC considered when the application process was started last fall was impact on area historic sites. That was before the County Historical Society had designated it as an historic site.