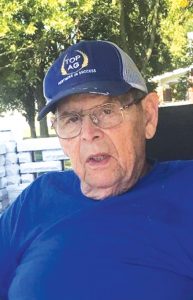 Mr. Handy was a coal miner for Monterey Coal Company in both Albers, IL and Carlinville, IL until his retirement. Between stints at the mines, Harry and Mary owned and operated the Handy Bar in Virden until 1978, when they sold the bar and moved to Okawville, IL.

Harry was a great man who never knew a stranger and he loved his family with all his heart. He loved his Cardinals (also known as those “Big Dummies”) and he loved going to The Eagle’s Nest to have a Pepsi, a cold Stag beer or just to help out. Harry’s pride and joy were his grandkids and great grandkids. He loved teaching them fishing, deer hunting, or showing them how to plant a garden.

In addition to his parents and wife, he was preceded in death by a grandson, Jason Young; a great grandson, Callen Goforth; two sisters, Eileen Boesdorfer and Juanita Cardosi; and four brothers, Stanley, Ellis, Larry, and Tom Handy.

Funeral services will be held from the Campagna Funeral Home in Okawville on Friday, April 29, 2022 at 8 P.M. with Pastor Jeffrey Schwab officiating. Following the service, cremation will be performed, and interment of ashes will be at a later date in the Auburn City Cemetery in Auburn, IL.

Friends may call at the Campagna Funeral Home in Okawville on Friday from 5 P.M. until the time of the service.

In lieu of flowers, memorials may be made to Angel for Autism, Heartland/ProMedica Hospice, the American Cancer Society, or the Alzheimer’s Association and will be accepted by the Campagna Funeral Home.