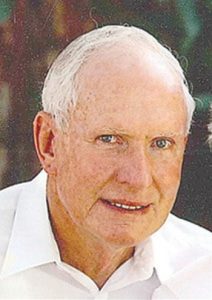 Phil B. Jones of rural Richview, IL, departed this life at his residence on Thursday 21 April 2022, the result of natural causes. He had attained the age of 86 years, 1 month and 22 days and was well-known around Washington County and beyond.

Mr. Jones was a “leap year baby,” born on 29 February 1936, in rural Washington County, the first son of Edwin Howard and Dorothy Marion (Zacheis) Jones. Phil was raised on the family farm (the fourth generation) located just north of Beaucoup. He attended one-room schools, Hoyleton Grade School, and Nashville High School, where he met his future wife, Judith Henderson. They were united in marriage at St. Paul’s United Church of Christ in Nashville on 26 June 1962, and Judy survives his passing.

Phil loved God, his family, his community, and nature, and he devoted his life to these causes. He was known for his wisdom, common sense, patience, and kindness. Phil was a proud alumnus of the University of Illinois at Urbana-Champaign, where he completed his B.S. in Agriculture in 1958 and his M.A. in Journalism in 1959. Phil served his country as a member of the United States Air Force until 1962, when he re-entered civilian life. Especially interested in mechanics and farm machinery, he worked as a staff writer then became Agricultural Engineering Editor of Successful Farming Magazine. Phil and Judy returned to the family farm in 1974, where he pursued his many interests: farming, conservation, housebuilding, mechanics, writing, antique clock collecting and repair, Nashville Hornet sports, and community service. Perhaps his most important achievement was bringing safe and reliable water to rural families in Southern Illinois: he was one of the founders and President for 36 years of the Washington County Water Company. He wrote many successful grants for government funding to build the water system, helped to design it, and worked to maintain and expand it.

A lifelong and faithful Christian, Phil served as President, board member, search committee member, choir member, and confirmation teacher for the U.C.C. churches at Hoyleton and Nashville. He mentored many young people and he loved teaching them. A proud member of the Hoyleton and Nashville American Legion posts, Phil was active in recruiting and sending young people to Boys’ and Girls’ State. He supervised placing flags on veterans’ graves on Memorial Day for many years. He also served on school boards, as a Friend of the Nashville public library, and as a coordinator for the Washington County Food Pantry at Irvington. At home, he loved to tinker with clocks, cars and computers and feed the wild birds. His favorite color was “the green of growing things in the spring.”

Funeral services will be held at the St. Paul United Church of Christ in Nashville, IL on Friday April 29, 2022, at 11:30 AM with Pastor Beverly Kahler officiating. Interment will follow in the church cemetery. Military graveside rites will be accorded by the American Legion Post 110.

Friends may call at the St. Paul United Church of Christ in Nashville, IL on Friday from 9:30 AM until the service hour.

Should friends desire, and in lieu of flowers, memorials can be made to the Washington County Food Pantry of Irvington; the Washington County Partners for Pets (Nashville); and the Friends of the Library (Nashville) which will be accepted by the Campagna Funeral Home of Nashville (in charge of the arrangements)The best memorial to Phil will be actively serving the community he loved so much. Online expressions of sympathy can be made at www.campagnafuneralhomes.com.