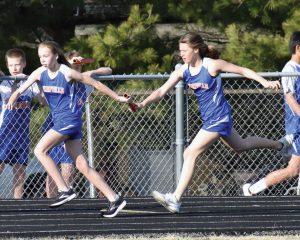 Junior high track season is in full swing with 25 new and 4 returning members. The first meet at Mater Dei on March 30 was canceled due to weather conditions and will not be rescheduled.

The boys and girls teams had a strong showing at their first season and conference meet at Breese Central on April 2. The boys placed fourth overall with 37 points despite having only 11 runners. The girls placed second with 75 points, three points shy of the first place finishers, Albers/Damiansville. Other teams at the meet were Aviston, Carlyle, and All Saints Academy.