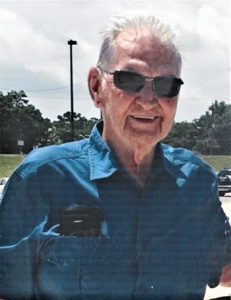 Mr. Wallace Luebke of Okawville, IL departed this life in the Coulterville Care Center in Coulterville, IL on Saturday, April 9, 2022 at 9:00 A.M. He had attained the age of 91 years, 11 months, and 8 days.

Wallace was born in Nashville, IL on May 1, 1930, the son of Theodore and Martha (nee Haake) Luebke. He was a 1948 graduate of Okawville High School and served in the United States Coast Guard. Wallace was united in marriage to Elaine Krown in the Immanuel Lutheran Church in Okawville on April 4, 1959, and she survives his passing.

Mr. Luebke was a faithful member of the Immanuel Lutheran Church in Okawville, and along with Elaine, served the church as custodian for many years. Wallace worked as a tugboat mechanic for Cargill for many years and later was a coal miner for Peabody Coal Company at the River King Mine in Freeburg, IL. He also did maintenance work at the Original Spring Hotel in Okawville, and he and Elaine worked as custodians at the First National Bank in Okawville. Wally enjoyed woodworking and loved spending time with family and friends.

Left to mourn his passing is his wife of 63 years, Elaine Luebke of Okawville; two children Theresa McQuillan and husband Eugene of Belleville, IL and Aaron Luebke and wife Angela of Okawville; six grandchildren, Alison Oakley and husband Heath of Okawville, Talayna McQuillan and partner Muhammed Idrees of Belleville, Sierra Crump and husband Dakota of Fairview Heights, IL, Ashley Spratt and husband Gerard of O’Fallon, IL, Alisha Finke and husband Evan of Nashville, IL, and Angelica Powell and husband Cody of Okawville; five great grandchildren, Jordan Oakley and girlfriend Kaylee, Aidan and Arrie Idrees, Colten Finke, Ava Powell, and another great grandson on the way; a sister-in-law, Harriet Luebke; a brother-in-law, Louis Krown and wife Tangiara; nieces and nephews, as well as a host of friends.

In addition to his parents, he was preceded in death by a sister, Caroline Meier and husband Louis Jr., two brothers, Harold Luebke and wife Grace, and Wilfred Luebke; and a sister-in-law, June Poppe and husband Robert.

In accordance with the wishes of Wallace and his family, cremation will be performed, and a private memorial service will be held at the Campagna Funeral Home in Okawville.

In lieu of flowers, memorials may be made to American Legion Post 233 in Okawville and will be accepted by the Campagna Funeral Home.