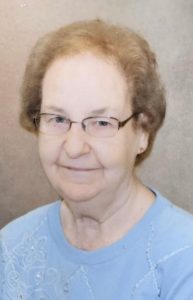 Karen was born in Nashville, IL on April 25, 1938, the daughter of Leo J. and Margaret (nee Kemena) Witt. She was a 1956 graduate of Nashville Community High School. Karen was united in marriage to Harold Martens in the St. Paul Evangelical Church in Nashville, IL on November 26, 1960, and he preceded her in death on August 29, 2016.

Mrs. Martens was a faithful member of the St. Salvator Lutheran Church in Venedy where she was previously a member of the Dorcas Society. Karen worked as a clerk at Diedrich’s Department Store and at Borowiak’s Department Store both in Nashville. She was an avid reader and enjoyed bowling with her friends in bowling league. She also enjoyed doing arts and crafts, but she especially loved spending time with her family.

Funeral services will be held from the St. Salvator Lutheran Church in Venedy on Tuesday, March 29, 2022 at 11 A.M. with Pastor Art Eichhorn officiating. Interment will be in the church cemetery.

Friends may call at the St. Salvator Lutheran Church in Venedy on Monday from 5 P.M. until 8 P.M. and again on Tuesday from 9 A.M. until 11 A.M.

In lieu of flowers, memorials may be made to the St. Salvator Lutheran Church Building Fund and will be accepted by the Campagna Funeral Home.