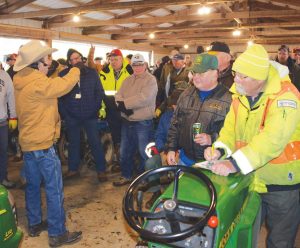 The crowd of about 3,000 people for Riechmann’s semi-annual farm equipment auction was the largest is the last five years, said auctioneer Loyd Riechmann.

He attributed the good crowd Saturday to decent weather – it had stopped raining and fields too wet for work. The morning temperature was cool, but not frigid.

Another factor is that many farm equipment sales have changed to on-line instead of in person at the site. Many farmers still prefer to go to an auction, Riechmann said.

Even with about 1,700 auction numbers issued for the, it was still not as large as past auctions that had over 2,000 numbers issued. Riechmann attributes that to fewer farmers.

The auction attracted buyers from surrounding states, as well as Pennsylvania, Tennessee, and South Carolina.