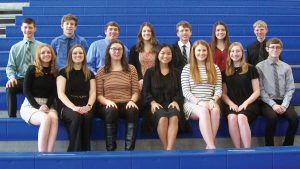 After many weeks of patiently waiting to hear about the ACES competition from February, results finally came in last Monday.

The Okawville ACES team once again took first place at the regional competition at Kaskaskia College held February 19. This test was taken online at the high school, and the following team members were awarded the following medals:

“I also would like to mention that this academic team has placed first at regionals for 15 years in a row,” said ACES coach Rhonda Hormann. “Okawville has amazing academic students!”

The team then went on to compete at the sectional level on March 4 at SWIC, where the team finished second overall.

The following awards were given:

The team will now compete at the state level the week of April 1.  This competition will also be online.

Students try out for the team by taking at least two exams in the areas of Biology, Chemistry, Physics, Math, English, Computer Science, or Engineering Graphics.  All scores are compiled, and the top 48 scores are then chosen for either the varsity or junior varsity team.

Once the team is formed, students practice material for the test by studying in two areas. This is done in the mornings before school or at lunch time and provides a great way for students to use their strength of academic ability.  They can also earn scholarships from the colleges where the competition occurs.

“The Okawville community definitely has much to be proud of,” Hormann said. “Not only do these students perform well in the competition, but they also represent our high school with character and academic excellence!”