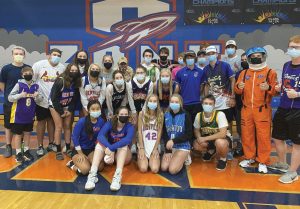 The Student Section Showdown competition was created by the IHSA Student Advisory Committee to give students a chance to show how they support the home team.

A video of the O-Zone was submitted to the IHSA SAC, which judged entries based on school spirit, creativity, organization, overall fan participation, and several other criteria.

According to Jared Juenger, the co-editor of the Okawville Lanch Pad, the school’s student news site, some of this year’s themes included Ref Appreciation Night, Hawaiian Night, Frat Night, among others.

The IHSA SAC announced the winning student section during the IHSA State Finals Saturday. The O-Zone had previously won the Student Section Showdown in 2017, 2018 and 2019.

The O-Zone video submitted for judging can be viewed on YouTube under 2022 IHSA SS Showdown: Okawville.