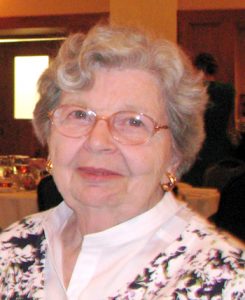 She married Armand Hoepker on April 5, 1952, sharing 50 years of happiness prior to his death in 2002.  They were the parents of two daughters, Melinda Reeves (Joseph), Spearfish, SD, and Patricia Potter (Arlo), Whitewood, SD.  They were proud grandparents to Shelby (Russ, Jr) Rehm Spearfish, SD; Kyle Reeves, Medford, OR; Cameron Potter, Whitewood, SD; Quentin (Haley) Potter, Duluth, MN.  They were also great-grandparents to Moira Rehm, Nolan Rehm, Spearfish, SD, and Jaxon Potter, Duluth, MN. Their children, grandchildren and great-grandchildren all survive as well as other much-loved family.

Colleen lived most of her life in Illinois – on farms in the Freeburg to Addieville area.  The years of her marriage were spent in the Danville and Catlin area.  After Armand’s death she moved to Spearfish, SD to be near family, spending these last years with children and grandchildren nearby.

Although she worked some through her younger years, Colleen was primarily a home-maker and care giver.  She helped both family and friends when they were ill or experiencing difficulties.

Early in her life, she chose to dedicate herself as one of Jehovah’s Witnesses and enjoyed greatly the friends, meetings and annual conventions for over 80 years.  A virtual memorial was held on Saturday, March 19, 2022.  Burial will be at a later date.