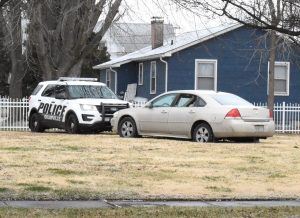 The Washington County Sheriff’s Department took a report of an attempted burglary near Addieville Friday morning. The suspect fled the scene but was later located near the Super 8 in Okawville.

The vehicle driven by McReynolds was reported stolen from Missouri. When officers attempted to make contact with McReynolds, she allegedly hit three police vehicles with her car and drove westbound on State Route 177.