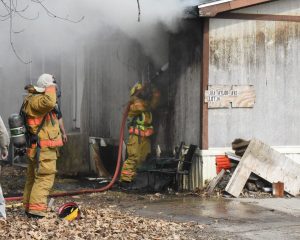 Firemen from Okawville and Addieville departments were on scene fighting the fire around noon Friday,  for just under two hours.

According to sources, Ratermann was alerted to the fire by his dog barking. He was home between his split shifts on a dairy farm.

His wife, Laurie, was at work at Burger King when the fire started.

The family that has lived in Okawville since 2009 lost almost everything in the fire.

They are hoping to find another mobile home in Okawville. WSMH Park manager Kathy Lynch is assisting them with the process. They are temporarily staying with relatives in Centralia.

A fund has been started to assist the family at First National Bank. The fund is in the name of one of the Ratermann’s adult children, Brandon, who works at TOP Ag.

In addition, another son, James Ratermann, who lives on his own in Okawville, works at Road Ranger in Okawville, which will also be accepting donations.

The family is also accepting donations of clothes. According to a Facebook post, the family needs men’s shirts in extra large and 2XL, jeans and pants in 36×32, 34×32, and 40×32. Shoe sizes 12, 12.5 or 13. Women’s clothes are also needed in medium or large in shirts, size 10-12 in jeans and pants, and 9 or 10 in shoes. To help with expenses, gift certificates to local stores are also needed.