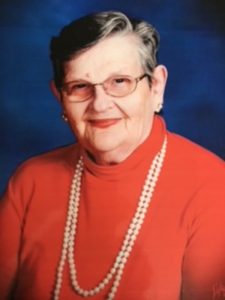 Mrs. Dorothy Roethlisberger of Okawville, IL departed this life in the Countryside Manor in Aviston, IL on Wednesday, March 2, 2022 at 1:20 P.M. She had attained the age of 85 years, 1 month, and 1 day.

Mrs. Roethlisberger was a member of the Olive Branch Lutheran Church in rural Okawville. Throughout her life, Dorothy was a hard worker. She worked at Busman Fuse Company in St. Louis for 20 years. Dorothy also worked as a school bus driver for Okawville Unit District 10, while also working at the Okawville Senior Center. She was employed by the Department of Rehabilitative Services and in the home healthcare industry until retiring. Mrs. Roethlisberger was an avid reader and enjoyed crocheting and sewing. Dorothy was a talented seamstress and designed and made many wedding gowns, bridesmaid dresses, prom dresses, and clothes for her children. She was very creative and artistic. Above all, she was extremely proud of her children and grandchildren.

Left to mourn her passing are her four children, Deborah Simonton and husband Matthew of Okawville, Florence Jacobs and husband Allen of Ballwin, MO, Christine Nichols and husband Gregory of Nashville, IL, and John Roethlisberger and wife Danette of Bankston, AL; two brothers, Orville Stegman and wife Phyllis of Addieville, IL, and Paul Stegman and wife Mary Elsie of Nashville; three sisters-in-law, Maryann Stegman of Okawville, Dorothy Alongi of DuQuoin, IL, and Agnes Roethlisberger of Coulterville, IL; 10 grandchildren, 13 great grandchildren with another on the way; special friends, John and Deb Musielak of Barnhart, MO, numerous nieces and nephews as well as a host of friends.

In addition to her parents and husband, she was preceded in death by daughter, Helen Bejma; a son Frederick in infancy; a sister, Erna Gramenz; and a brother, Delbert Stegman.

In accordance with the wishes of Dorothy and her family, cremation will be performed.

Memorial services will be held from the Campagna Funeral Home in Okawville on Saturday, March 12, 2022 at 11 A.M. with her grandson, Rev. Daniel Simonton officiating. Interment will be in the Olive Branch Cemetery in rural Okawville.

Friends may call at the Campagna Funeral Home in Okawville on Saturday, March 12 from 9 A.M. until the service hour.

In lieu of flowers, memorials may be made to the Susan G. Komen Race for the Cure, or to the Alzheimer’s Association and will be accepted by the Campagna Funeral Home.