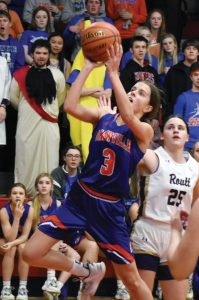 The week started with a contest against Calhoun in the Bunker Hill Sectional. Okawville got out to a good start with a 15-7 first quarter lead with ten first quarter points from Briley Rhodes and five from sophomore Alayna Kraus.

Kraus extended the lead with two breakaway fastbreaks and a jumpshot from in the paint to score another six second-quarter points. Senior Sydney Tebbe did a nice job on the boards and had four second quarter points, and Okawville led 31-18 at the half.

Rennegarbe started off the third-quarter with four quick points along with another three pointer by Rhodes.

Scoring for Okawville were Kraus with 24. Rhodes had 18. Rennegarbe added 13 and Tebbe had six.