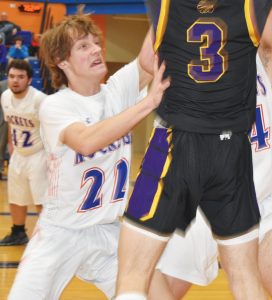 The Okawville Rockets hosted the Carlyle Indians on Senior Night and played their best game of the season.

Prior to the game, Okawville honored the five seniors on the team: Evan Miller, Ethan Riechmann, Levi Traub, Wilson Welch, and Cole Wiedwilt. Those same five kids started the game for the Rockets, and gave the team a jolt of excitement and got the team off to a red hot start.

After Carlyle opened the game with a basket, the Rockets responded with an 11-0 run. The first five points came from Riechmann, followed by three pointers from Traub and Welch. Miller, making his first start of the year, made several great hustle plays to keep plays alive and get the energy going for his teammates. The Rockets led 15-11 after the opening quarter.

Another three pointer from Welch, and stick back baskets from juniors Andrew Savard and Hayden Shubert, and the Rockets kept riding the momentum and took a 29-24 lead into the half.

Four Rockets reached double figures: Riechmann with 17, Shubert 13, Traub 12, and Welch 11. Rounding out the scoring were Joe Jansen with seven, Wiedwilt six, and Savard and Dillon Teter with five each.