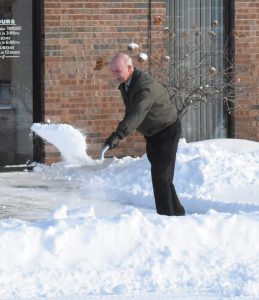 Much of the county was shut down by the winter storm that dropped ice and snow on the area last week.

Schools were shut down from Wednesday through Friday, and some local businesses had limited hours.

The first wave of the storm brought ice late Tuesday and into Wednesday. The snow began early Thursday morning and lasted all day, with accumulations and drifting.

Kiefer Heiman of the Washington County Highway Department reported that many east/west roads in the county were impassable by Thursday night due to drifting snow.

“We had a truck plowing County Road 6 from just south of Addieville west to the county line,” Heiman said. “An hour later when the truck got back to the Addieville, the drifts were already seven inches deep in some areas.”

Heiman said that the roads are a bit lower than the surrounding fields, and when the wind comes out of the north, snow piles up in the low spots. He estimated that most of the county had between four and five inches of accumulation.