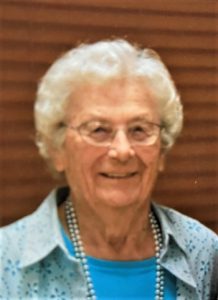 Regina was born in Bolo Twp., Washington County, IL on May 6, 1924, the daughter of John and Anna (nee Blus) Chwarczinski. She was united in marriage to Evans W. “Shorty” Nagel on November 11, 1943, and they were blessed with two children, Laura and Billy. Evans preceded her in death on June 13,1965. She was then united in marriage to Rudolph Kraus on January 1, 1972 and he preceded her in death on May 30, 1999.

Mrs. Kraus worked on the line at the Hoben Candy Company in Ashley, IL until its closing. She then worked in the office at Freeburg Sand and Gravel in Freeburg, IL until her retirement. She was a member of the Immanuel Lutheran Church in Okawville. Regina enjoyed doing puzzles, quilting, playing Pinochle, and watching St. Louis Cardinal Baseball. She especially loved following her grandchildren in their sporting activities.

In addition to her parents and husband, she was preceded in death by her son Billy Nagel; eight brothers, Leo, Frank, John, Joe, Ben, Ray, Steve, and George; two sisters, Sophie Krzyanoski and Clara Cimoch, and a brother and sister in infancy, Alex and Genevia.

Funeral services will be held from the Immanuel Lutheran Church in Okawville on Saturday, February 12, 2022 at 10:30 A.M. with Pastor Eric Wood officiating. Interment will be in the Old St. Ann Cemetery in Nashville, IL

Friends may call at the Immanuel Lutheran Church in Okawville on Saturday from 8:30 AM until the service hour.

In lieu of flowers, memorials may be made to the Immanuel Lutheran Church and will be accepted by the Campagna Funeral Home.