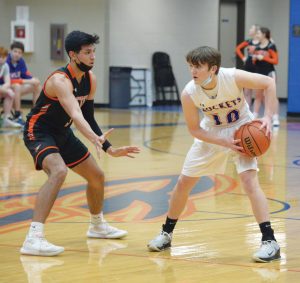 The Okawville Rockets returned to the court Friday night and hosted the Chester Yellow Jackets.  Despite leading for the first twenty-four minutes of the ball game, the Rockets ultimately fell to the visitors 45-43.

An opening layup from junior Hayden Shubert, and three-pointers from Dillon Teter and Ethan Riechmann got the Rockets out to an early 13-4 lead. Two Yellow Jacket buckets to ended the period, with the Rockets leading 13-8 after the opening quarter.

A three-pointer from senior Wilson Welch kicked off the second quarter, followed by another from Cole Wiedwilt. Another deep ball from Riechmann and the Rockets went into the half leading 25-20.

With nine points in the 3rd quarter from junior Grant Schleifer, the Rockets pushed their lead to 36-30 heading into the final quarter.

After Okawville’s lead for three quarters, Chester scored the first eight points of the 4th quarter to take a 38-36 lead.  Chester would maintain the lead the rest of the way as the Rockets fell short 45-43.

Riechmann paced the Rockets with 12 points.  Rounding out the scoring was Schleifer with 9, Teter 6, Shubert 4, Jansen 4, Wiedwilt 3, Welch 3, and Aiden Anderson 2.