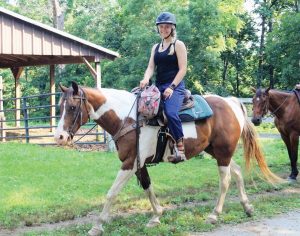 When she was a little girl, Rylee Hodges-Stone wanted nothing more than to have a chance to attend summer camp at DuBois Center. She has never lost that enthusiasm that she will bring to the campground as its new program director.

The New Baden native who now lives in Mascoutah fell in love with the place when she was in grade school when she worked hard for the chance to attend summer camp in southeastern Washington County.

When she was a little girl, Hodges-Stone said camp eligibility was based on grade level completed. But as the oldest girl in her class, she wanted to go before the rest of her classmates.

“I talked to my pastor, the late Gretchen Sterrett of New Baden Zion UCC, into writing a letter explaining that I was the oldest kid in my class, and that I was certainly mature enough to go,” said Hodges-Stone.

In exchange for the letter, she was expected to demonstrate her maturity by working at her church’s chili suppers and fish dinners. That is exactly what she did.