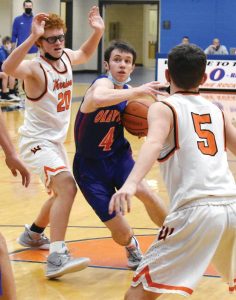 The Okawville Rockets opened up the 2022 Okawville Invitational with a 59-29 defeat at the hands of a very talented Columbia Eagles team.  After finding themselves down 17-8 at the end of the opening quarter, the Rockets clawed to within three points, trailing 23-20 behind 11 second quarter points from senior Ethan Riechmann.  A three pointer at the halftime buzzer for the Eagles pushed the lead to 26-20 at the half.

Columbia came out in the second half and started the third quarter with a 10-0 run, pushing their lead to 36-20 and coasting to the 59-29 victory.

Riechmann paced the Rockets with 21 points.  Rounding out the scoring was Dillon Teter with 3, Grant Schleifer 3, and Wilson Welch 2.

After opening the game with a quick jumper from junior Joe Jansen, the visiting Warriors responded with a 13-0 run of their own.  A three pointer from Riechmann stopped the bleeding and the Rockets found themselves trailing 16-7 after the opening quarter.  Behind three pointers from Ethan Riechmann and Cole Wiedwilt, the Rockets pulled to 26-20, but two scores from the Warriors extended the lead back to ten points as the Rockets went into the half trailing 32-22.

A strong start to the third quarter, fueled by baskets from Teter and Schleifer once again pulled the Rockets to within 6 points.  Unfortunately the Rockets would get no closer the rest of the way as the Warriors opened up the lead and coasted to a 52-38 victory.

Riechmann once again paced the Rockets with 20 points.  Also contributing to the scoring column was Schleifer with 5, Wiedwilt 4, Welch 3, Teter 2, Andrew Savard 2, and Jansen 2.