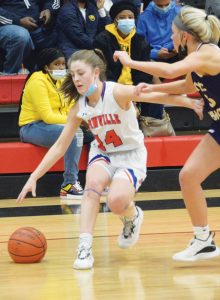 The Okawville Lady Rockets dropped their first game of the season Saturday in the championship game of the Highland Tournament.

After beating O’Fallon 52-45 in the semifinal last Wednesday, the Lady Rockets were on the wrong end of a 53-47 score against Civic Memorial.

The Lady Rockets jumped out to a lead in the first quarter and never trailed in their win over O’Fallon in the semifinal.

Okawville shot well from beyond the arc, connecting on 6-of-11 three-pointers. They also hit 12-of-14 free throws to help ice the game.