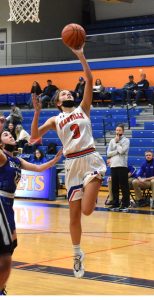 The Lady Rockets (23-0) started play in the Highland Tournament Saturday featuring many of the best teams in the area.

In first round action at Highland, Okawville took on Salem at 10 a.m. on Saturday and advanced after a 55-19 win.

The Lady Rockets played tremendous defense in the contest, limiting Salem to just four first quarter points. Okawville led 36-5 at the half and never looked back on the way to the commanding win.

Okawville was led in scoring by Alayna Kraus with 17 points, including two three-point shots. Junior Briley Rhodes added 12 while sophomore Madisyn Wienstroer put up ten points. Ellie Frederking, Raegen Luechtefeld and Sydney Tebbe each had four points. Luechtefeld led the team in steals with four. Rounding out scorers were Ady Harre and Megan Rennegarbe each with two points.