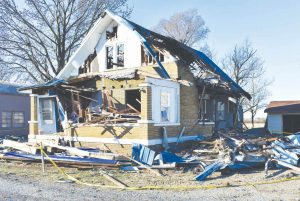 Addieville firefighters were on scene minutes after the fire was reported by a driver passing by the house.

Addieville Fire Chief Ryan  Wiedwilt said the fire had already done significant damage to the house by the time they arrived on scene.

Wiedwilt said the fire probably began on the first floor, and by the time they arrived, had spread all the way up into the attic.

A metal roof and freezing temperatures made it difficult to get at the fire in the attic. Firefighters had to cut into the attic through the porch.

An additional problem was that the north wall collapsed, which resulted in a gas line leak that had to be contained. Firefighters were on scene for almost five hours. The cause of the fire has not yet been determined.