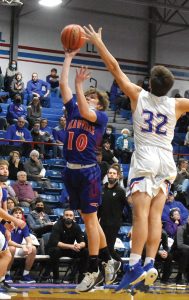 The Okawville Rockets beat Red Bud before falling at Carlyle and Nashville.

The Rockets hosted the Red Bud Musketeers last Tuesday night at the O’Rena and came away with a hard fought 59-47 victory.

Behind a torrid shooting pace, the Rockets raced out to a 15-2 lead and never looked back.  Three pointers from Ethan Riechmann, Joe Jansen, and Wilson Welch paced the early scoring spree as the Rockets led 18-5 after the opening quarter.

The hot shooting regressed a bit in the second quarter but the Rockets stayed strong, getting inside baskets from Jansen and transition baskets from Grant Schleifer and Cole Wiedwilt. The Rockets headed into the half with a 31-23 lead.

Two more baskets from Jansen early in the third quarter stretched the Rocket lead to 39-25, and six points down the stretch from Riechmann gave the Rockets a 43-34 lead heading to the fourth quarter.

With an 11-for-14 performance from the foul line, the Rockets were able to put the game away comfortably down the stretch and hold on for the 59-47 victory.

Riechmann led the Rockets with 20 points, and Jansen joined him in double figures with a season high 12 points.  Rounding out the scoring was Andrew Savard with eight, Wiedwilt six, Dillon Teter and Welch five each,  Schleifer two, and freshman Aidan Anderson one.