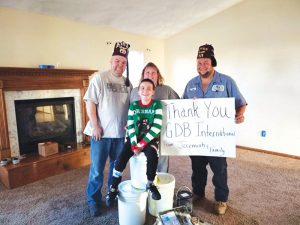 The mission of Shriners is to help children who have medical problems. Typically, it is through fund-raising to support the Shriner’s Hospital.

For county resident Cody Kesel, work was more personal. Kesel helped a fellow Shriner, Jim Krejci, whose son Jeremiah has cerebral palsy, with work on his house in Waterloo.     Kesel and Krejci had met at their Shriner orientation, and they became friends.

For anyone who knows Cody, knows he has a huge heart. Cody and his wife Chelsea knew this was a project that needed help.

To begin this project, Cody and Chelsea, who previously worked for GDB International in Nashville, contacted their former manager who agreed to provide paint and supplies to get this project going.  Kesel delivered supplies to fellow Shiners’ home and assisted in painting multiple rooms.