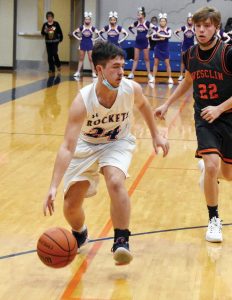 The Okawville Rockets won once in their first trip to Pinckneyville for the Duster Thomas Hoops Classic during the holiday break.

The Rockets faced off in the consolation bracket of the Duster Thomas Classic against the Meridian Bobcats and fell by a score of 46-45.

The Rockets and Bobcats battled hard for 32 minutes, with neither team ever leading by more than four points. Ethan Riechmann got the Rockets going with a three pointer to start the game, and junior Grant Schleifer added a three point play of his own. The Rockets led 13-12 after one quarter.

Meridian bounced back with five quick points to start the second quarter, senior Cole Wiedwilt answered with a three pointer of his own to pull the Rockets back within one. After another layup from Schleifer and a bucket from Dillon Teter, the score was knotted up at 22-22 heading into the half.

Back to back three pointers to start the second half from Teter and Riechmann gave the Rockets an early three point lead. Meridian would answer with a 6-0 run of their own to get the lead back. Free throws from Joseph Jansen and Hayden Shubert knotted the score up at 35-35 heading to the final quarter.

A cold start early in the fourth quarter allowed Meridian to once again recapture the lead. Trailing by four with two minutes to go, the Rockets tried their best to pull off the win. Two baskets from Riechmann pulled the Rockets to within one point. After forcing a Meridian turnover, the Rockets had one final chance with six seconds remaining. A Riechmann three pointer was off the mark in the closing seconds and the Rockets fell 46-45.

Riechmann led the Rockets with 20 points. Rounding out the scoring was Teter with seven, Schleifer six, Wiedwilt five, Jansen four, and Shubert three.