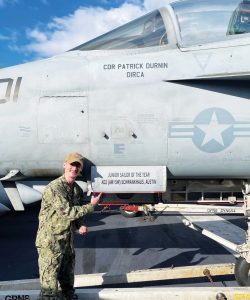 Navy serviceman Austin Schwankhaus has been named the Junior Sailor of the Year for being the best E-5 Sailor in VFA-81.

He is now deployed to Saudo Bay, Greece.

Schwankhaus, a 2012 graduate of Okawville High, attended Kaskaskia College a year before joining the Navy.

He is a jet mechanic in the Navy, stationed at Naval Air Station Oceana in Norfolk, Virginia. He has had a 3 year deployment to Japan, and a six month deployment to the Mediterranean.