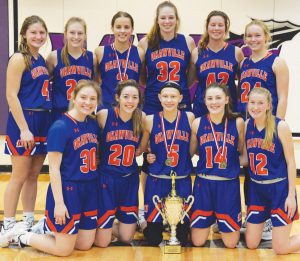 The Lady Rockets came out on top at the Mascoutah Tournament last week. Okawville had to a take a hard road to the championship, going through the #5, #1 and #2 seeds.

In the first game of the tournament, Okawville took on the Bulldogs of Highland. The Lady Rockets bounced out to a 13-3 lead after one quarter and 23-10 by the half. The Lady Rockets cruised to a 49-29 victory.

Leading point scorers were Alayna Kraus and Briley Rhodes both with 14. Megan Rennegarbe had eight. Ellie Frederking chipped in five. Raelyn Obermeier added three and Sydney Tebbe and Jordyn Heckert each had two, and Madisyn Wienstroer scored one.

In the second round, Okawville faced off against Freeburg in a matchup of the two remaining unbeaten teams in the tournament.

Okawville played even with Freeburg for the first part of the contest, with Freeburg taking a one point lead, 9-8 near the end of one quarter. The Lady Rockets seemed to flip a switch after losing the lead and went on a scoring run in the second quarter to lead 29-11 at halftime. Kraus had the hot hand and added nine second-quarter points to lead the way. Okawville won the contest 49-24.