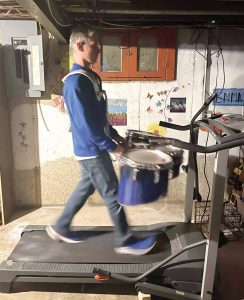 Walking on a treadmill while carrying a drum set is not a normal exercise routine, but Steve Browne had a dream to chase.

The band director at Nashville High School has been preparing for playing music in the Rose Bowl Parade on New Year’s Day, one of 300 current and former music educators with the opportunity.

Like many events over the past two years, Browne’s chance to play in the parade had to be delayed due to the pandemic. He said he was originally chosen to play in May of 2020, but COVID had other plans.

As the date approached, Browne began to prepare for the phyiscal exertion of marching in the big parade. That required some unorthodox training methods.

“I’m carrying my drum set, and that’s 30 to 40 pounds,” said Browne. “They told us the parade is more than five miles long and it would take us two-and-a-half hours.”