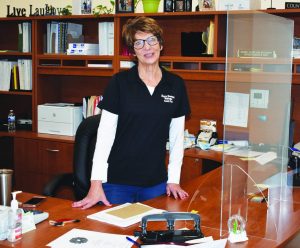 In that position she is the Clerk, Recorder, Election Authority and Registrar.

Since she is retiring before the end of her term, Deputy Clerk Shari Hempen was named by the County Board to fill the expired term.

Heseman began working in the County Clerks office in 1977, soon after graduating from Okawville High School.

She worked for Clerks Virgil May and then Tom Ganz. When Ganz announced his retirement,  Heseman sought and was elected Clerk in 2014. After working in the office 37 years, she felt she was the best candidate for the job.

Heseman considers herself lucky that she didn’t have competition in her 2014 or 2018 races. “I am very thankful to the voters of Washington County for the support and voter turn-out they showed me. I always received high voter totals” she said.

The introduction of computers is just one of the many changes in Heseman’s 44 years working for the county. When she started, all entries were hand written.

Another challenge was the move to the Community Center during the Courthouse renovation several years ago.