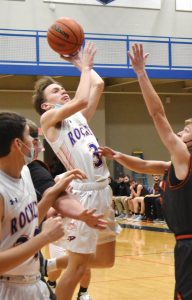 The Okawville Rockets dropped three straight games last week, including falling in the first round of the Duster Thomas Classic in Pinckneyville.

The Rockets hosted the Wesclin Warriors last Tuesday night and fell to the visitors by a score of 47-34.

Quick three pointers from Dillon Teter and Ethan Riechmann tied the score up at 6-6 early in the first quarter. An 11-3 run by Wesclin to close the quarter saw the Rockets trailing 17-9.

A three pointer from Joe Jansen and a basket by junior Grant Schleifer pulled the Rockets within four at 25-21, but a late basket by the Warriors pushed their halftime lead to 27-21.

A rough third quarter where the Rockets went scoreless was their undoing as they trailed 42-21 after three quarters. The Rockets did fight valiantly until the end, trimming the lead to twelve points before ultimately falling 47-34.

Riechmann paced Okawville with 14 points. Also contributing to the scoring column was Dillon Teter with five, Schleifer and Aidan Anderson with four each, Jansen with three, and Cole Wiedwilt and Wilson Welch with two apiece.