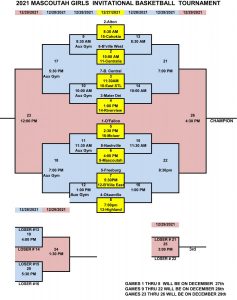 As in almost every season, the Okawville Rockets and Lady Rockets will be busy in the hardwood in the week between Christmas and New Year’s Day. The only difference is which hardwood the Rockets will be in action.

Next week, the Rockets will head to Pinckneyville for the Duster Thomas Hoops Classic. This will be the first time in decades Okawville will not be in the field at the Mater Dei Tournament.

“We’re looking forward to maybe seeing some teams we don’t always see,” said head coach Ryan Heck. “It will be fun to play in a gym with so much history and tradition.”

Heck says that he is seeing improvement in the Rockets’ play, as evidenced by a win over a Greenville team that had Okawville’s number earlier this year.

“We are getting better, we just have spurts where or periods of the game where we struggle,” Heck said. “we need to do a better job of sustaining our good play over the course of an entire game.”

The first-year coach also said that it is not just the players learning their roles. “I’m getting a better feel of roles for the kids, who’s capable of what, just more familiarity with a lot of aspects of the game.” 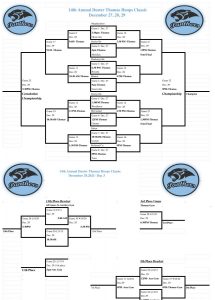 Lady Rockets Heading Into Mascoutah on a Roll

While the Rockets will be in unfamiliar territory, the Lady Rockets will tread a more well-worn paths at the Mascoutah Invitational.

Okawville, which earned a #4 seed in the 16-team bracket, will try to remain unbeaten when they take on Highland in the first round.  The Lady Rockets will play at 7 p.m. Monday.

“I am just so proud of how this team is playing, and they are a super fun-to-coach team with a passion for the game,” said coach Michelle Hasheider-Burianek. “The ladies do a great job pushing the ball down the floor, they have a real knowledge of the game, and we have tremendous depth on our bench which helps us to stay fresh.”

That depth will be put to the test, as the Mascoutah Invitational is traditionally is one of the most rugged basketball tournaments in the area.

“I am looking forward to seeing how this team performs in the Mascoutah Tournament,” said Hasheider-Burianek. “We are the only small school and it will be a big test, but I am confident that this group will rise to the occasion.”