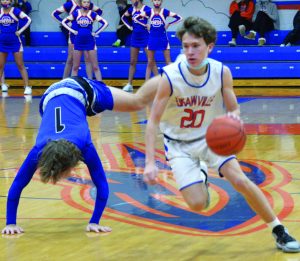 The Okawville Rockets avenged a defeat to Greenville and beat Sparta to improve to 3-5 on the season.

After suffering a 60-42 defeat at the hands of the Greenville Comets during the opening week of the season, the Rockets traveled to Greenville last Tuesday night and defeated the Comets 52-40.

Andrew Savard kicked things off with a strong finish to give the Rockets an early 2-0 lead. From there, both teams would trade baskets for most of the quarter, and the Rockets found themselves tied 10-10 at the end of the first quarter.

After a solid opening quarter, Okawville shooters went ice cold to start the second quarter, going scoreless for the first six minutes of the period.  Fortunately, the Rockets put up a strong defensive effort and kept themselves in the game during that time and trailed 17-10 before Landan Schmersahl got the lid off the basket with a three pointer.  Ethan Riechmann added a three pointer and layup in the last minute to give the Rockets a 18-17 lead going into intermission.